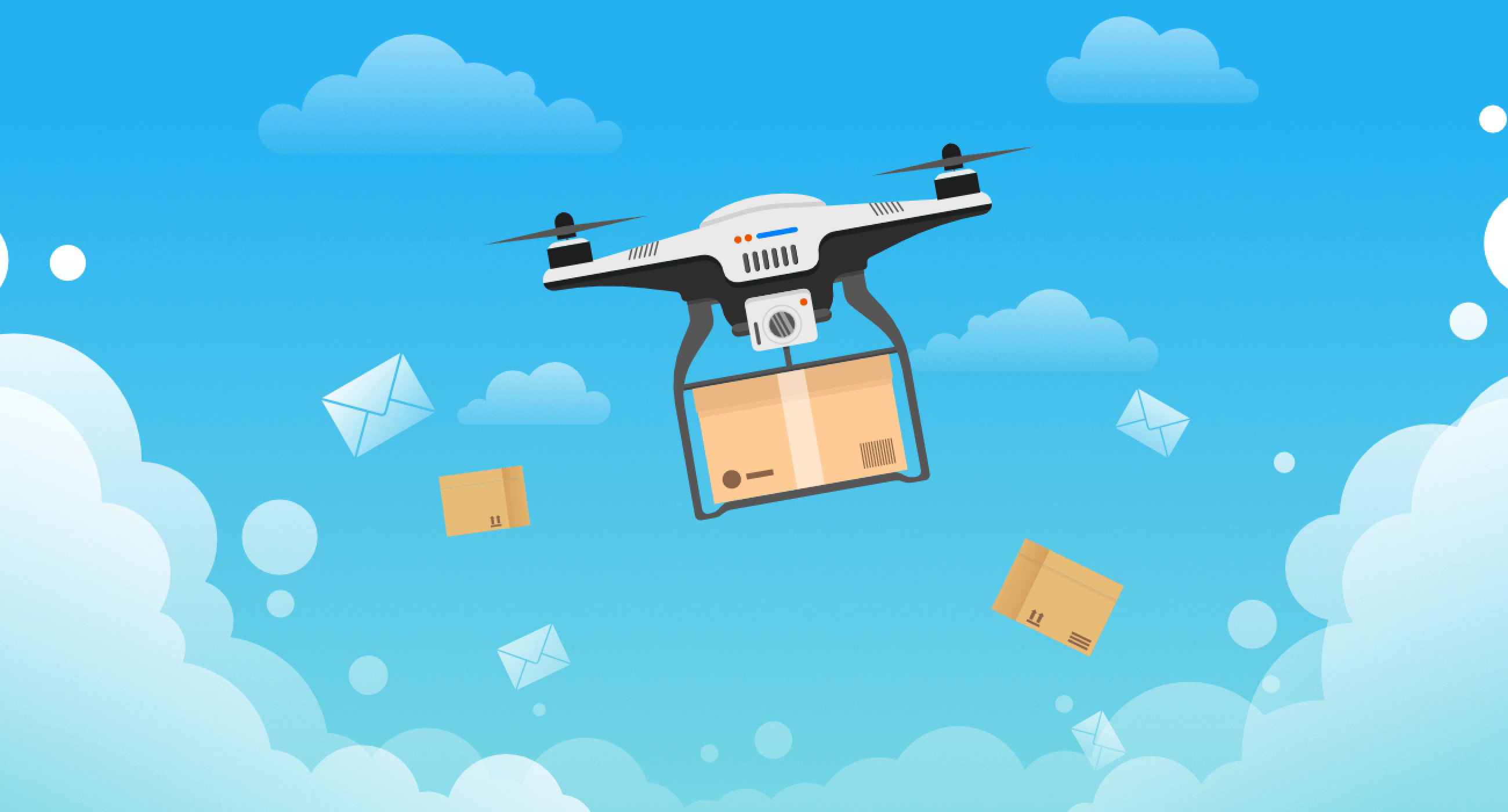 Back in the days, drone technology was primarily used in the fields of research, photography, communication, and security. However, with the advancement of technology, more of its uses are coming to light.

Perhaps, the most important one being in the retail industry. For online retailers, drone package delivery has come as a blessing in disguise. The reason being, it can now quicken the delivery process by reaching at the customer’s doorsteps.

For those who are unaware of drones, let us explain to you its meaning. Drones are used without human intervention. These aerial vehicles are autonomously handled. A prime example of that is the usage of drones to deliver medical items in combat zones. Today, these unmanned aircraft have become hot favorite commercial delivery methods. With time, we will see these drones becoming available for the general public.

Let’s now look at some of the statistics that will highlight the prominence of drone delivery.

Here’s a quick look at the definition of  a drone delivery service.

1. Definition of a Drone Delivery Service

Drone delivery can be defined as a process that is remotely controlled and carried out through UAV (unmanned aerial vehicle) for the delivery of packages. It is one of the most preferred delivery methods for books, documents, medicines, and food items.

According to the U.S. Department of Transportation, it has been reported that there are more than 1 million drones registered in the US alone. A large portion of these are privately owned and flown by photography enthusiasts and other hobbyists. Recently, drone deliveries have been used by reputed e-commerce companies like Amazon, UPS, FedEx, and DHL.

Currently, the focus is on using drone delivery for small packages within a small area. It can be for a package between 0.5 kg to 8 kg to be delivered within a 5km radius.

2. How Does a Drone Delivery Work?

As the technology has developed, companies have started using drones for the eCommerce fulfillment processes. Several countries have already started using this delivery method. Here’s an example. In Australia alone, more than 3,000 packages have been delivering using drones.

However, like any other technology, drone delivery systems have their own set of benefits and challenges. Several researchers are trying to eliminate the loopholes with deliveries by drone. It might take some time for these trends to get ironed out.

In the past, human beings used to employ remote control to fly drones. This used to happen in the military. However, now companies are aiming for total automation now, thus an increased focus on using drones

Once they achieve this objective, it would mitigate the chances of human error. For example, Amazon is working on a human-free system where machines are programmed to pick up packages and fly to pre-defined destinations to deliver them.

3. Advantages of a Drone Delivery Service

4. Disadvantages of a Drone Delivery Service

With time, we will see drones changing the logistics and eCommerce sector for the good. The good news is, drones give a quick, cost-effective, and simple delivery option that is also beneficial for the customers. According to a blog titled “What's the Future of the Shipping and Logistics Industries in 2020?”, it has been estimated that drones will increase eCommerce revenue by roughly 25% in the next decade. This will make online retailers save US $50 million in delivery costs.

Deliveries that cost less than the US $1 are being received in a matter of 30 minutes. This goes to show that drones will have a major effect on eCommerce deliveries. It will give buyers the confidence of placing high-value orders and receiving the item in less than an hour.

As the demand for drone delivery in eCommerce keeps on rising, companies will try to improve the distance and weight a drone can take to make it a more feasible option.

With the growing demand for drone delivery in eCommerce, there is a need for an advancement in technology. Companies are trying their level best to improve the distance and weight a drone can take to make it a more viable option.

Here are some of the companies that have already started using Drone Delivery.

Amazon has decided to launch its very own drone delivery stem that will aid in delivering packages to their customers in less than half an hour. The company claims that their drones are perfectly capable of traveling in the 10-mile radius and carrying packages of a maximum weight of 5 pounds. It is still too early to say anything about this project. However, Amazon has high hopes of starting this delivery service in the near future.

Dominos are planning to launch their drone delivery of pizzas from their UK branch. They have even revealed a video of their “DomiCopter” dropping off pizzas to their customers’ homes. The video became viral in a matter of hours after release.  Although there has been no official statement released by Dominos, there are quite a few food companies that are looking to take advantage of this technology.

The global leaders in package delivery service provider is contemplating on adopting drone technology to give a modern look and feel to its services. They plan to transform their delivery trucks into a vehicle serving as a drone base. This will act as a take-off and landing zone on the roof of the vehicle.

Their drone will not be fully-automated. But, instead, it will be functional when the driver is close to the area of the customer to avoid traffic hold-ups and delays. This will speed up the process.

Zomato, India’s one of the largest restaurant listing and food delivery companies has successfully conducted a test of its drone delivery in the country. During the test run, the drone was able to carry 5 kgs and managed to cover 5 km in 10 minutes. In the near future, the company aims at providing commercial deliveries in less than 15 minutes with the assistance of drones.

The Flirtey startup is contemplating seriously on delivering anything, any time to any place with the help of drones. Just like Amazon, this Australian company’s drone delivery project is still at an infancy stage. But, the company is determined to use this technology effectively.

It would be wonderful to see airborne deliveries being made for the eCommerce industry in the coming years. This is especially possible now with the success of the UPS drone delivery service. Although, as discussed in this blog, there are certain challenges however, the potential for growth is imminent.

With a higher number of orders and lower shipping costs, this method of delivery can result in a significant amount of growth in revenue for online businesses. Which company will win the race of introducing drone delivery in the near future? Please post your comments and let us know below.