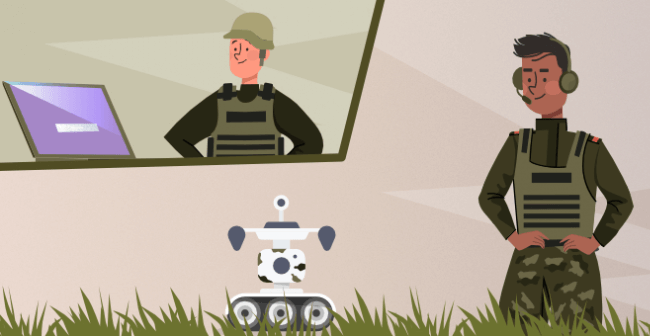 Understanding one another is one of the most fundamental ways humans use language and is, therefore, a desirable autonomous system capability. Language is also one of the few unexplained evolution phenomena that makes homo sapiens different from other species.

The Army of States has found a way to leverage this power of language to enhance their military tactical prowess.

This new way of communicating through dialogue will reduce training overhead in controlling autonomous systems and improve on-field Soldier and control-room agent teaming.

ICT or The Institute for Creative Technologies is a Department of Defense-sponsored University Affiliated Research Center (UARC) functioning in collaboration with DOD services and organizations.

UARCs collaborates with prestigious institutions that conduct groundbreaking research in the field of science and innovation. ICT mainly brings artists and technicians from the game & film industry under one roof with computer and social scientists. These varied talents then study and develop immersive products for military training and health therapies, education, and more.

Efforts by ICT to develop JUDI supports the Next-Generation Combat Vehicle Army Modernization that prioritizes automation. It reduces the Soldier's burden of holding walkie talkies in the field by allowing them to team with robots for better tactical control.

2. What Does the JUDI Voice Assistant Do?

In the words of Dr. Matthew Marge, one of the leading researchers on the project said,

"To be able to have a dialogue will be an important capability for autonomous systems operating across several levels so that soldiers across the land, air, sea, and information spaces can retain situational awareness while on the battlefield."

"This technology allows a soldier to interact with robots through bidirectional speech and dialogue in tactical operations wherein verbal task instructions can be used for command and control of a mobile robot. The technology also enables the robot to ask for clarification or provide status updates for different tasks. As opposed to relying on pre-specified, and possibly outdated, information about a mission, an active dialogue enables these robots to supplement their understanding of the world by conversing with human teammates."

For a better understanding, advanced mini-cars are deployed with JUDI voice assistant in the testing phase. In theory, soldiers would give single commands to the robot, like -- "go to the top of the hill." Now the robot would combine its camera data to find a nearby hill. Putting its natural language processing to work includes information from follow-up questions as needed to precisely administer a task.

In the final version of these voice-enabled smart robots will also be able to ask follow-up questions should it get confused.

According to the U.S. Army, soldiers controlling robots with voice commands will enable them to handle multiple devices on the field while being extra aware of the robot's situation. This is better than the current, joystick-based controls.

Though voice assistant JUDI uses A.I. and NLP technology very similar to consumer voice assistants like Google Assistant, Apple's Siri, and Amazon's Alexa. It is unique and distinct in many ways, says the Army.

The three major distinguishing factors that separate JUDI from other voice assistants are safety, efficacy, and quick learning.

Cloud technology is used for large, distant, and labeled databases. These data will not only be secure but also probably wouldn't be accessible on the battlefield.

On the other hand, JUDI has a custom on-premise database to interpret a soldier's intent based on their language. The dialogue processing is based on a statistical classification method that interprets a Soldier's intent from their spoken language.

JUDI is programmed to be deployed with robots operating in battlefields taking real-time orders. Any error in its operation could lead to a life or death situation.

A commercial digital assistant can be forgiven for switching on the bedroom fan instead of the bedroom lights. In contrast, a military robot can't afford to fail to give out the correct positions of enemies on a battlefield.

Since the needs on the field are high-level systems like JUDI, we need to not only precisely work with one robot but many. Additionally, these bots must be smart enough to use situational awareness to assess surroundings and request for more information from a soldier if it needs more data to make a decision. JUDI recognizes patterns fast and effectively.

4. What's the Future For JUDI?

Moving ahead, the researchers will scrutinize JUDI's robustness with the help of physical mobile robot platforms. This is planned at an upcoming AIMM ERP-wide field test in September.

"The ultimate goal of the U.S. Army is to increase the efficiency of soldiers by teaming with autonomous systems like robots. So, they can effectively and safely complete missions, especially in scenarios like reconnaissance and search-and-rescue,"

"It will be very satisfying to know that soldiers can have accessible interfaces to autonomous systems that can scale and easily adapt to the mission by understanding the context."

JUDI will shift the paradigm of soldier-robot interaction. It will replace the traditional heads-down, hands-full joystick operation of robots to a heads-up with a hands-free interaction mode. JUDI enables a soldier to team with more than one robot while also maintaining situational awareness of the battlefield.

JUDI is an archetypal example of how technology can help make human processes reach an epitome of potency.